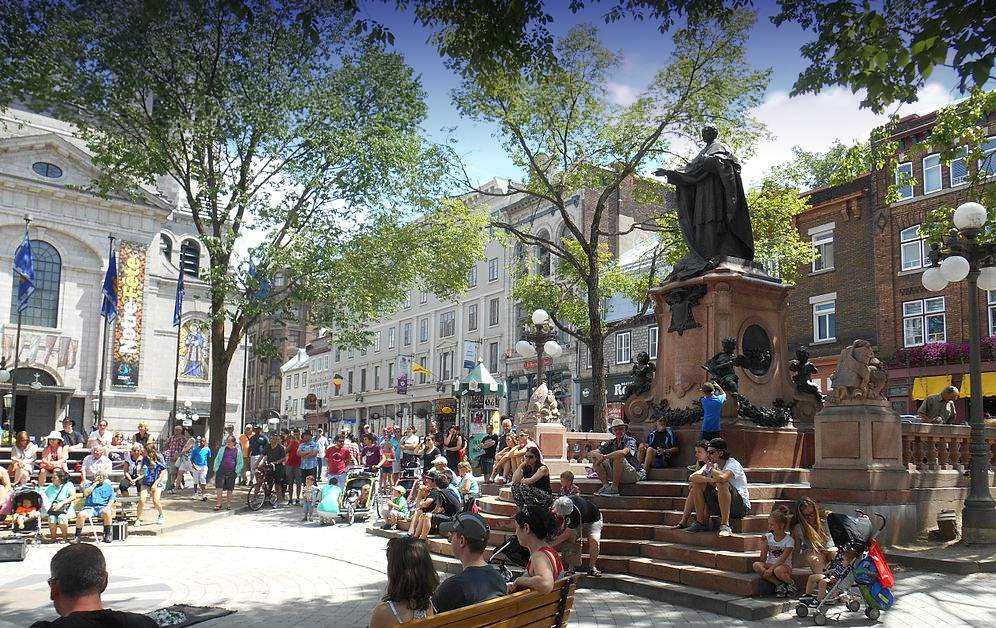 About-Quebec.com
An incomplete guide to discovering Quebec
► You are here:   Quebec  ›
Quebec city
The former capital of New France is a world heritage site

Tourist Information office and
start of self-guided walking tour
There's a fairly commonly-held belief that all large cities in North America are much the same; and up to a point there's a good degree of truth in it. But there are exceptions, and surely none more so than Quebec.
Quebec city is like no other in North America. One of the oldest big cities in North America, with roots going back to the early seventeenth century, it is the only major city in North America to have kept intact a substantial historic quarter; and above all, it is the only historic walled city in America north of Mexico.
While other historic cities like Boston and New York have lost all or most of their historic heart, Quebec has kept it more or less intact. Uniquely among cities north of Mexico, old Quebec has all the feel of a historic European city, which in reality is what it is - a European city in North America.
Quebec, or Quebec City, has been a capital city since it was founded in 1608, as the capital of French-speaking Canada; at the time, the whole of Canada was a French colony. It was thus founded a year after the establishment  of Jamestown, Virginia, and 22 years before Boston; and it has remained a capital and an important city ever since. 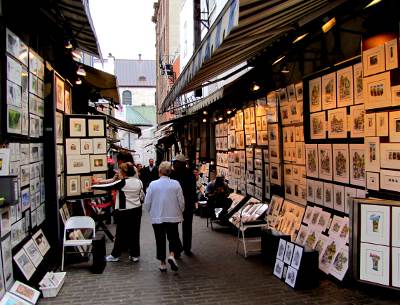 A bit of Paris ? Rue du Trésor, in Old Quebec
To this day, old Quebec - le Vieux Quebec - remains largely nestled within its ramparts like some of the finest old cities in Europe.  The ramparts that still survive to this day date back to the start of the nineteenth century, when the city was controlled by the British, and many of the buildings inside the old town date from the same period; but there are others that date back to earlier centuries. The men who built them were French or British or Canadian, and they built them in the traditional materials and styles of the time, making Quebec, with its buildings of brick and stone, the most European of North American cities north of Mexico.

Old Quebec does not just look like a European city, it has the atmosphere of a European city too. Doubtless the fact that people here speak French contributes to the atmosphere. But walk round the streets and alleyways of old Quebec, and you will be forgiven for imagining that you are in Paris or Edinburgh or some city in provincial France. 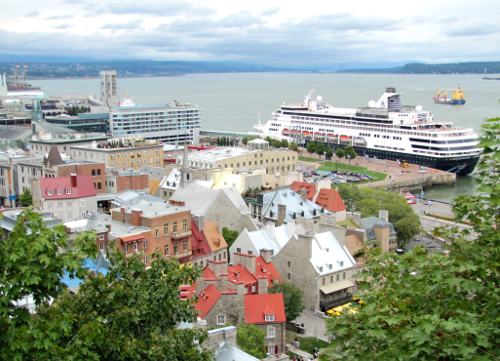 
A trip around Old Quebec can start from anywhere, but one place to begin is in the heart of the Upper town or Haute Ville, outside the Tourist Information Office at the junction of Rue du Fort and Rue Sainte Anne (see marker on map above), an area packed  with  restaurants, souvenir shops, art galleries and small museums. The pedestrianized Rue Sainte Anne is the most popular street in Old Quebec. From here, first discover the narrow streets and passageways between the Rue Sainte Anne and the Rue de Buade. You may also want to discover Notre Dame cathedral, at the east end of Rue de Buade, whose outside walls date from the 18th and early 19th centuries. The interior of the cathedral is classic French baroque, from the early 19th century.
It's easy to spend a morning enjoying this central part of Old Quebec, and there are plenty of places here to take lunch or sit back and enjoy a drink before setting out on an easy self-guided walking tour of the other sites of Old Quebec.

Your walking tour :  this circuit is just over 2 miles, plus any extras you may want to add in.
From the Tourist Information Office at the east end of the Rue Sainte Anne, it is a very short walk past the statue of Champlain (the founder of Quebec) to the Promenade des Gouverneurs, with its funicular to the Lower town and magnificent views. But more about the Lower town later. For the time being, remain in the Haute Ville, and take a walk along the Promenade,enjoying the views to the St. Lawrence and beyond.
At the start of the Promenade des Gouverneurs is the Terrasse Dufferin, the most popular viewpoint, and behind it stands the iconic 611-room Château Frontenac hotel (the place to stay in Quebec, if you can afford it), reputedly the world's most photographed hotel, and a symbol of Quebec. It is just about 400 metres (440 yards) from the Champlain statue to the  impressive fortifications of the Citadelle, the finest historic military fortress in North America. The Citadelle was built by the British between 1820 and 1850, largely on the basis of plans laid out by the 18th century French military architect Vauban. Naturally, entrance to the citadelle is at the landward end, so from the Promenade des Gouverneurs you need to walk round the walls to the entrance.
The Citadelle is a functioning military establishment, but it is also open to tourists; the most popular event is (just like outside Buckingham Palace) the ceremony of the Changing of the Guard, that takes place daily at 10 a.m. from June 24th to Labour Day (first Monday in September).
From the Citadelle, return down the Côte de la Citadelle road  to the Rue Saint Louis and the Parc de l'Esplanade, for the best views of the city walls of Old Quebec, and the Porte Saint Louis, the finest of Quebec's city gates. 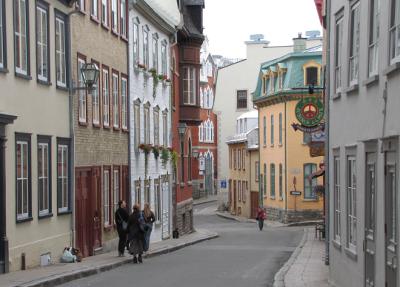 Rue Couillard....the most European looking city street in North America ?
Away from its popular tourist areas, there is another part of Old Quebec that is definitely worth the visit, if you want to discover a more intimate and traditional part of the city.  From Rue Saint Louis, return to the Place de l'Hôtel de Ville, then carry on down the Rue des Jardins and the Côte de la Fabrique. At the foot of the Côte de la Fabrique, turn right into the narrow Rue Couillard. Walk a few yards, shut your eyes, then open them again, and wonder where you are. Rue Couillard looks like a street lifted straight out of provinicial France or England, a narrow street of small brick or stone houses, still much the same as they were two centuries ago. The same goes for parts of the streets at the lower end of rue Couillard.
From there, make your way down and north towards the Quai Saint André, but stop off in the area round the Rue Saint Paul, with its pavement cafés and small shops. .

From here it's a short walk to the centre of the Lower town which stands on the site of the original settlement, beside the water at the foot of the bluff. At the heart of the Lower town is la Place Royale, with the church of Notre Dame des Victoires, the oldest stone-built church in North America, built between 1687 and 1816.  Also on Place Royale there is an interpretive centre. Close by, though in a modern building, is the Museum of Civilisation.
From Place Royale, it is an easy walk back up to the centre of the Haute-Ville, and to the point from which you began your walking tour. Alternatively, take the funicular railway which will bring you almost straight up to your original starting point.

Other tours of Old Quebec

For those who don't want to walk, much of the above tour, and more, can be taken using the hop-on hop-off buses of Quebec tours. These bright red open top tour buses run every half hour in the summer season.
For something more romantic or exquisite, there are horse-drawn carriage tours; these have three official departure points, at the Hotel Frontenac, the Porte Saint Louis, and the Esplanade Park; but customers can also arrange to be picked up at other locations.


Check out hotels in Quebec city at best online rates with booking.com.

And coming up on About-Quebec.com: 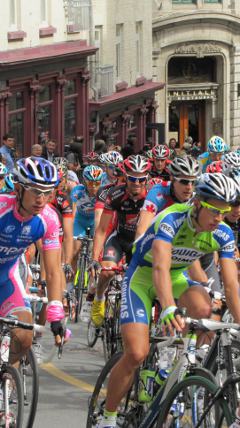 Le French touch? Not quite the Tour de France, but a major cycle race in the streets of Old Quebec

About France - a thematic guide to France. Over 200 pages of information for visitors and students.