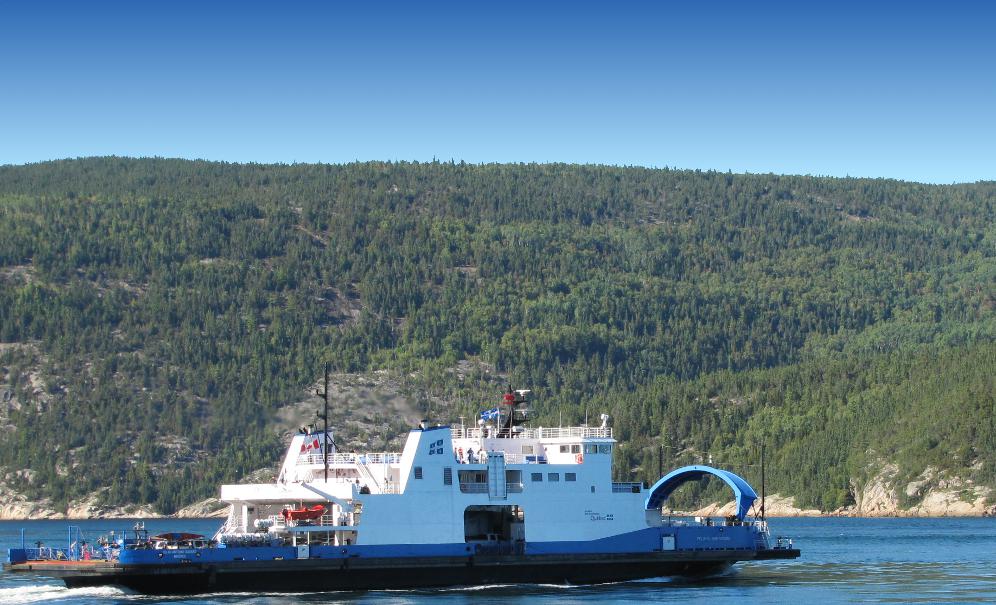 North Shore of the St. Lawrence

► You are here:   Quebec  ›
Northeast from Quebec city

Discovering the north shore of the Saint Lawrence

Quebec's Highway 138 - A trip to remember  along a spectacular coastline

It's a drive of just over 250 miles or 400 kilometres up the north shore of the Saint Lawrence, from Quebec city to the small town of Baie Comeau; but it's worth the journey.
What's more, you don't even need to come back the same way, as from Baie Comeau you can take a ferry across the Saint Lawrence to Matane on the other side – a crossing somewhat longer than the trip from Dover to Calais... such are distances in this part of the world.
The journey is even better if you take the time for détours off the main highway to discover some of the attractive villages, townships and rural areas in this part of northeastern Quebec.

The first point of interest along the route is at the small town of Sainte Anne de Beaupré. An outlying suburb of Quebec city, Saint Anne de Beaupré has two points of interest, its Basilica and the "Cyclorama of Jerusalem", a massive circular wall painting, one of the largest paintings in the world, completed in 1895. the basilica, a major Catholic pilgrimage centre, is a modern building completed in 1946 on the site of an earlier baroque church..
Before leaving Sainte Anne, take highway 360  up into the hills following signs for Mont Sainte Anne and Saint Ferréol les Neiges. In winter, Mont Saint Anne is one of Quebec's major ski resorts; in summer, it is a great spot for rambles or other activities in the forests. The road after Mont Saint Anne is a byway that  takes you through attractive farming country, until it rejoins the main Route 138 at  Les Cheneaux.
Ten kilometres after Les Cheneaux, take a short trip off the 138, and drive down to the coast of the Saint Lawrence at the little village of Petite Rivière.  The road down to Petite Rivière drops steeply off the higher ground, almost giving the impression that you are driving off the edge of the earth. This is the feeling you'll get in winter too, if you come skiing here at the Le Massif ski area, which is just to the east.There are some attractive guest houses in Petite Rivière .
From Petite rivière, you'll need to return to the main road, and then within ten more kilometres you'll reach the delightful small town of Baie Saint Paul, on the banks of the Rivière du Gouffre, and capital of the county of Charlevoix.  Baie Saint Paul is the centre of an agricultural area stretching inland, and known for its dairy products.  Two kilometres north of Baie Saint Paul, on the 138, you can visit the Cheese museum, the Economusée du Fromage, telling the story of local cheese making.

If you spend the night in Petite Rivière or Baie Saint Paul  (Check here for Baie Saint Paul accommodation), another enjoyable excursion is to take the train along the coast between these two locations.  Rail enthusiasts may prefer to take the train all the way from Quebec city to Baie  Saint Paul; but for a short and spectacular section of the route, the 25 minute ride between Petite Rivière and Baie Saint Paul  allows time to explore the station at the other end, before catching a train back a couple of hours later. The railway goes where the road doesn't, hugging the shoreline.

Leaving Baie Saint Paul behind you, rather than continue on the 138, take the coastal route 362, which from time to time offers great views over the Saint Lawrence, and rejoins the 138 at La Malbaie.
This area was opened up for tourism over a hundred years ago, a historic tourism industry that survives to this day in the shape of the large stone-built Manoir Richelieu hotel, overlooking the Saint Lawrence, which once served tourists on the tour ships that plied the waters of this great estuary.

North of La Malbaie, you are really in sparsely populated territory, and it is about 100 kilometres to the next proper township at Tadoussac, on the mouth of the Saguenay river or fijord. The road now runs through rocky terrain covered with mixed northern forest, a wilderness forest of conifers and deciduous trees. From time to time, the road is close to the sea, passing through small villages such as Saint-Siméon. Ten kilometres before Saint Siméon, take the turnoff marked "Port au Persil" and follow the old highway down to this shoreline hamlet which is listed as one of the most beautiful villages in Quebec. A small white wooden chapel beside the water's edge, and a cluster of wooden houses are all that make up this tiny village which was named Port au Persil by Champlain back in the 17th century.
After Saint Siméon, the highway leaves the shoreline and winds along through the forest for about 40 kilometres before returning to the water's edge just before Sainte Catherine and the Saguenay fijord , beyond which lies Tadoussac.  This is the high point of any trip up the north shore of the Saint Lawrence.
To gef from Sainte-Catherine, just before the fijord, and Tadoussac, just after it, traffic on Highway 138 crosses the fijord on a free ferry.

Zodiac trips allow whale watching up close
Sainte Catherine and Tadoussac are the main departure points for whale-watching excursions on the Saint Lawrence, and for boat trips up the Saguenay fijord. There are trips to suit all tastes -  you can choose between small motor vessels taking a couple of hundred passengers, or (for the more adventurous) trips by zodiac (motorized inflatables) which take you out for a whale-watching experience designed to be up close and confidential. The larger boats, run by Croisières AML, depart from Sainte Catherine, as do some zodiac trips : other zodiac trips and smaller cruise boats depart from Tadoussac. AML's "Grand Fleuve" whale-cruise boat is suitable for anyone, including those who would not be happy on a small boat. It has a snack bar, souvenir boutique, a choice of inside or outside seating, and a running commentary on whale sightings and other useful information..  Allow half a day for a whale-watching trip. 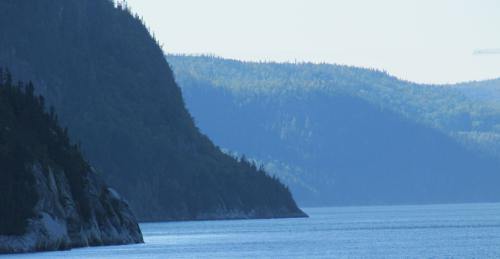 the beauty of Saguenay Fijord
Whale watching trips may include a short incursion into the Saguenay Fijord, a breathtakingly beautiful inlet flanked by near-vertical rock faces. But it is also possible to take a boat up the fijord - though you will probably not want to do the whole length, which is 100 km. Best check in Tadoussac to see which company is offering fijord trips and when, as details seem to change.
Tadoussac itself is an attractive small town with very historic roots, as it was the first French settlement in Canada, established in the year 1600 – though nothing remains of the original trading post. On the other hand, the "Old Chapel" of Tadoussac is the oldest wooden church building in North America, dating back to 1747.

Baie Comeau and beyond 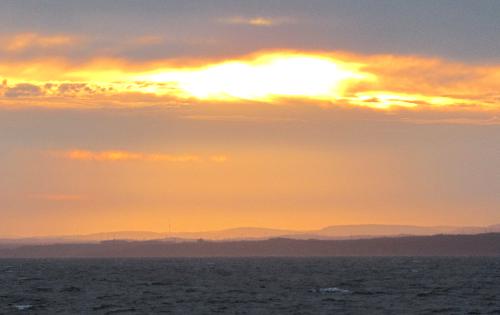 Farewell to the north shore : Baie Comeau from the evening ferry to Matane
After Tadoussac, it's still 122 miles - almost 200 kilometres - to Baie Comeau. There are not many people living up here, and the land gets wilder and emptier still. Highway 138 now hugs the coastline, or remains very close to it ;  this is road-trip country, a part of the journey where you can put the car on cruise-control, sit back and enjoy the vast distances, the forest and the views out over the Saint Lawrence. The estuary is almost 50 miles wide here, so wide that you may well not be able to see across to the other side.
A small port and industrial centre, built up on paper, hydro electricity and aluminium,  Baie Comeau itself (population 22,000) is the biggest city since Quebec, and it has all the feel of a frontier town; a town at the end of the road, a town beyond which there is nothing, except the vast open wilderness of northern Canada. Things seem to finish at Baie Comeau except the road to Labrador, and highway 138 that continues its journey up the coast.  Leave Baie Comeau on the road north if you want to; but do so at you own risk; a sign at the roadside just north of the town sums it all up "Fermont : 561 - Terre-Neuve et Labrador : 567 ".  That's kilometres, not miles, of wilderness forest...  but all the same it's a long way to drive. So maybe not. As for highway 138, it continues its way up along the coastline, past the occasional small settlement, a ribbon of tarmac with hardly any traffic, until it too peters out over 400 miles further on at a point known as Kegashka (population 138). Only the hardiest and most inquisitive travelers make it this far.
However, some make it as far as Sept-Iles, another industrial town and port 230 kilometres beyond Baie Comeau. With a population of almost 25,000 Sept Iles is a town dependent for its survival on minerals, a town that prospers and flounders according to world market forces. For tourists, there is however one attraction at Sept Iles other than the ability to be able to tell people "I drove up to Sept Iles"; and that is the train. Sept Iles lies at the southern end of a 200 km railroad across the forests and tundra landscapes of northeast Quebec and Labrador as far as the mining town of Schefferville, and there is a passenger train that does the return journey twice a week - surely one of the world's most extraordinary rail journeys. Up Mondays and Thursdays, back Tuesdays and Fridays.
Sept Iles accommodation       Schefferville accommodation

But for most travelers, Baie Comeau is the end of the road along the north shore of the Saint Lawrence. A place where you can turn back and retrace your route back down the north coast, or more interestingly get on a ferry and cross the 50 miles of Saint Lawrence to Matane in Gaspésie, and experience another part of traditional Quebec.


The ferry is the only way to cross the Saguenay fijord

Check out best online rates from Booking.com:
No pre-payment on most bookings; pay when you stay; no cancellation fees.

Hotels in Quebec city
Hotels near Charlevoix
And coming up on About-Quebec.com: 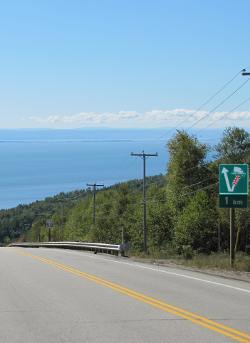 The road to Petite Rivière


About France - a thematic guide to France. Over 200 pages of information for visitors and students. 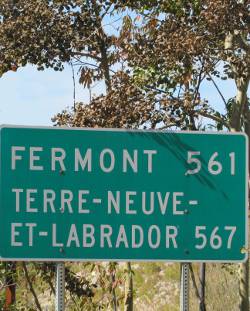 After Baie Comeau, venture on who will...

Text and all  photos on this page © About-Quebec.com