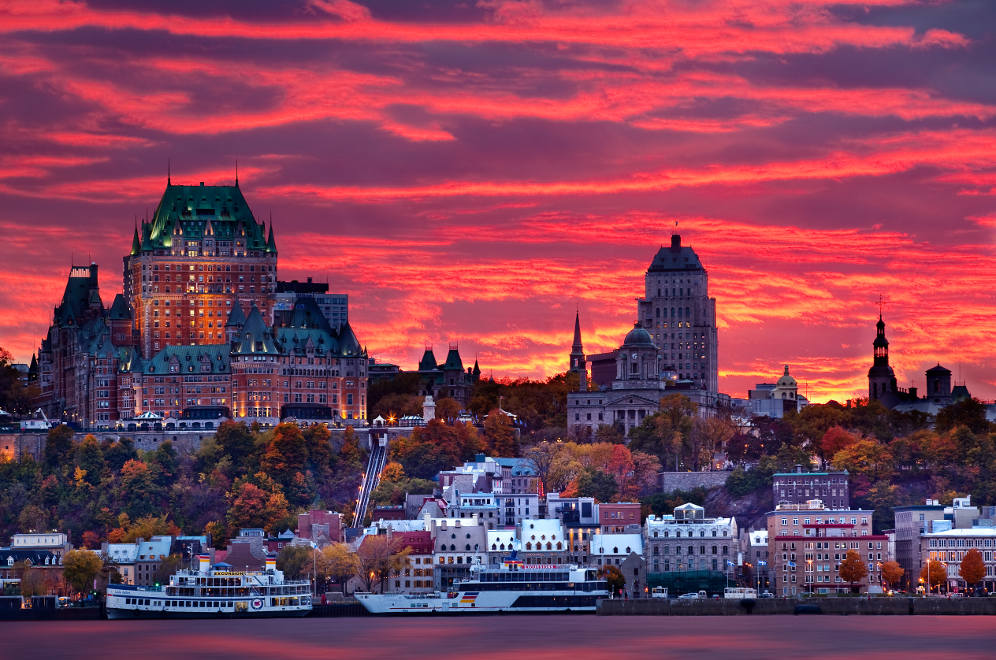 
An incomplete guide to discovering Quebec

The recipe: Two doses of France, one dose of Scotland, one dose of England, and two doses of North America.  Flavour with history, modernity and originality, and allow to mature for at least 400 years. Then serve.
The result: a perfect Quebec. A province that in its ways and its culture is unique in Canada, and unique in North America.

With Europe largely closed for Transatlantic visitordue to Covid-19 , North Americans are looking to their own continent for interesting travel destinations. And while most vacationing in North America is a distinctly North American experience, where English is the language of tourism almost everywhere, even in Mexico, Quebec really does offer an opportunity for "dépaysement"... the feeling that you are in a different country, far from home, a place with different cultures, a different language, and its own history.
Even for Canadians, visiting Quebec is like visiting another country, not just another province. Cross over the bridge from downtown Ottawa, and you're in Gatineau, a city where the people speak a different language. Take a weekend trip from Toronto or New York to Montreal, and you'll feel you've done far more than just an hour in the sky or a few hundred miles or kilometers up the highway. This is a city with its own culture, a place where you can take the metro, like in Paris,  rather than the subway, listen to people talking a different language, or a whole bunch of languages, and enjoying a lifestyle that is somehow different.
Whether you're from New York, from Paris or from London, from Chicago or Calgary or Croydon or even Calcutta, in cosmopolitan Montreal you'll find a blend of the familiar and the unfamiliar. In "The art of City-Making", Charles Landry described Montreal as "Paris without the jet-lag" for US visitors; and while it isn't really Paris and it doesn't have an Eiffel tower (Why not?  is a good question) Montreal is a city that gives you that sense of having reached somewhere different, somewhere new, even if you only came a short distance from over the US border. 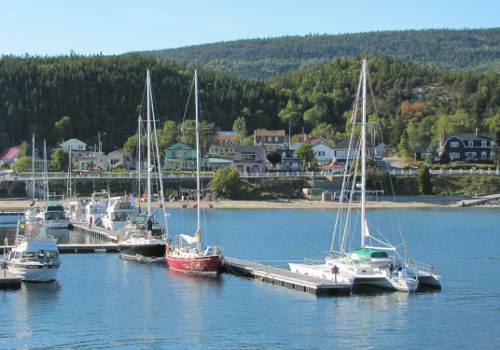 Tadoussac, on the north bank of the Saint Lawrence
But in the same way that Paris is not France, Montreal is not Quebec. To enjoy the real Quebec, rather than the real Montreal, go up the highway to discover Quebec city, the only walled city in North America north of the Mexican border, or further on to take in the rural beauties of les Laurentides; or travel up the northern shoreline of the Saint Lawrence, or enjoy the beauty of Gaspésie on the other side of the water. Most people only get to see Gaspésie from the air, as they fly in over the North-American continent on a transtlantic trip; but Gaspésie is far better seen from ground level, and for North Americans it's so much nearer than Europe.
Quebec is diverse : metropolitan and rural, familiar and foreign. And for North Americans it's there on the doorstep, a bit of France in North America. For visitors from Europe, it's it bit of America where the people speak French; and for visitors from France it's America as it might have been if a few European wars had gone differently, or it's France as it might be today if the French Revolution had not taken place.
For the French, Quebec is a bit of old France beyond the Atlantic; but it's also a place where the pre-revolutionary fleur-de-lys is still on the flag, where the people speak an old fashioned or idiosyncratic form of French, where to park a car you may have to "parquer dans un stationnement"  (in France you have to "stationner dans un parking"), where drinks are called "breuvages" rather than "boissons", where many public institutions and functions are still "royal", and people measure things in pieds and pouces (feet and inches), just as they do in the USA.


A very short history of Quebec

Quebec was the birthplace of modern Canada. Quebec was first "discovered" in 1535 by the French explorer Jacques Cartier, on his second voyage to the New World. Cartier and his expedition spent the winter of 1535-1536 stranded in the ice at the mouth of the Saint Charles river, where later on Quebec city would grow up. The area was colonised by the French in 1608, when explorer and navigator Samuel Champlain set up the colony of New France near the mouth of the Saint Charles, which is situated where the broad Saint Lawrence estuary narrows to be more like a river. Champlain used Quebec as a base from which to explore far up the Saint Lawrence river, and the area of the Great Lakes beyond. In 1624 he began work on the first protective walls to defend the settlement at Quebec from the English and from Indians.
In 1629, Quebec was surrendered to the English, but in 1632, under terms of the Treaty of Saint Germain en Laye, it was returned to the French, and work began, still under Champlain, to further develop New France. New France comprised all of France's territories in North America, stretching from the Hudson Bay area to Louisiana. Quebec was the capital and administrative centre of the whole colony, but in particular of the administrative division of New France which was given the name Canada, a local Iroquois word meaning "settlement".  For the next century and a half, the colony of New France developed, albeit slowly. In 1663 it was declared a Royal Province, and although the early settlers from France had included many Protestant Huguenots, including Champlain, colonisation of the new colony was henceforth limited to Catholics.  Its history was intimately bound into the history of Europe, as the main European powers of the 17th century, England, France and Spain, fought out their conflicts not just in Europe but in the New World too.
In 1713, the Treaty of Utrecht brought a degree of peace to Europe after the years of warring between the French and the Spanish Hapsburg Empire, supported by the English. The size of New France was reduced, and Quebec remained the capital of the French royal province. By 1720 some 25,000 people lived in French Canada; but there were continual conflicts between the English settlers of New England, and the French settlers of New France; there was commercial rivalry, and rivalries that accompanied historic tensions between the different Indian nations that inhabited the area. In 1759, as Europe was plunged in the "Seven Years' War", English forces under General Wolfe besieged and then captured the settlement at Quebec, after storming the fortifications on the Heights of Abraham. In the treaty of Paris, that put an end to the Seven Years' War, most of New France was handed over to England, and the history of Quebec, as part of the English colony of Canada, began.
After inclusion into British Canada, Quebec retained most of its identity. The people continued to speak French, and a French-style legal system continued. In  1774, the Quebec Act, passed by the British parliament, endowed Quebec with an unusual "bijuridicial" legal system, in which the old French tradition remains for civil law, while criminal law is administered according to the principles of English common law. Thus, modern Quebec is a unique blending of old French and British traditions and systems, a French-speaking province whose official head of state is the Queen of England, a place where they speak French, but use English or American measurements, and live a lifestyle that arguably now owes more to the United States and the rest of Canada than to either France or England, but is different from all three.  In short, an interesting and intriguing place to visit.

With roots going back to the sixteenth century, Quebec city is the best preserved old city in North America

► North of the St Lawrence
One of the finest road trips in America, a journey up Quebec's beautiful highway 138


About France - a thematic guide to France. Over 200 pages of information for visitors and students.

Text and all other photos © About-Quebec.com